The shoulder girdle is a sophisticated mechanism that acts as the fulcrum (or pivot point) for the upper limb, and its smooth function, strength and stability are vital in order to reliably place the hand in space to undertake everyday tasks. It is comprised of many bones, joints, bursae, muscles, tendons, and ligaments, and neurovasculature.

It is composed of 3 bones:

The scapula is a large flat bone which has a body (the flat part), a spine

(the ridge at the back of the shoulder), an acromion (tip of the shoulder blade) and a coracoid process (a projection from the front of the blade that serves as an attachment point for muscles and ligaments). It is integral to shoulder motion by moving around the posterior aspect of the thorax. In combination, the shoulder girdle allows for the most movement of all of the body’s joints.

The clavicle, through the medial sterno-clavicular joint and the

lateral acromioclavicular joints, acts as a load transmitting bony structure between the upper limb and the axial skeleton.

The humerus has the long shaft of the upper arm and ends with the humeral head,

which articulates with the glenoid. There is a groove for the long head of the biceps muscle and tuberosities (bumps) for the attachment of the rotator cuff muscles.

These bones are linked by ligaments to form joints, upon which framework the tendons and muscles facilitate movement. 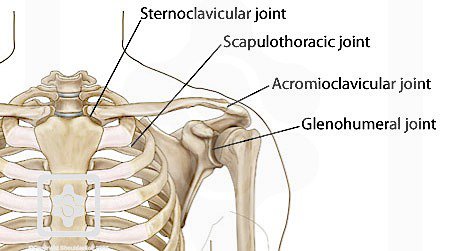 These bones and joints depend on linkages provided by ligaments which are tough fibrous flexible bands.

Some of the important ligaments are: 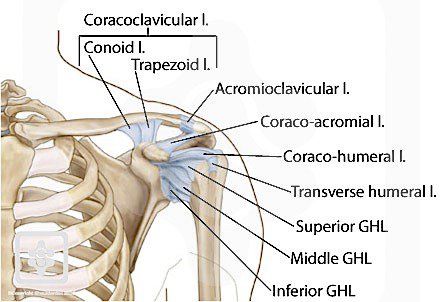 The above three muscles begin at the base of the skull, and connect the scapula and clavicle to the trunk of the body. 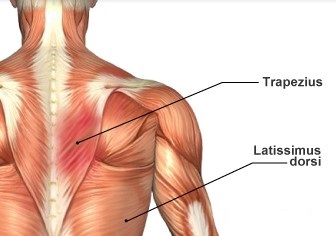 The above five, connect to the proximal end of the humerus and secure it to the body. 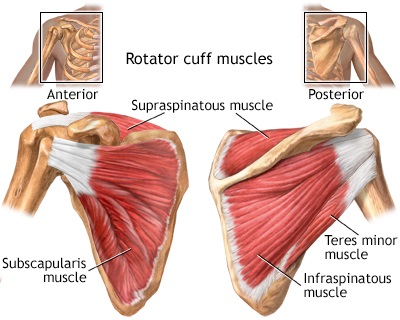 Finally, the above four muscles are the muscles of the rotator cuff. They connect the scapula to the humerus, as well as provide support for the glenohumeral joint.

The most important nerves are: 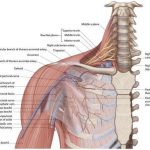 The scapula or shoulder blade is the bone that connects the clavicle to the humerus. The scapula forms the posterior of the shoulder girdle. It is a sturdy, flat, triangular bone. The scapula provides attachment to several groups of muscles. The intrinsic muscles of the scapula include the rotator cuff muscles, teres major, subscapularis, teres minor, and infraspinatus. These muscles attach the scapular surface and assist with abduction and external and internal rotation of the glenohumeral joint. The extrinsic muscles include the triceps, biceps, and deltoid. The third group of muscles includes the levator scapulae, trapezius, rhomboids, and serratus anterior. These muscles are responsible for rotational movements and stabilization of the scapula.

The scapula begins osteogenic development via endochondral ossification in week 11 of human embryogenesis. This occurs shortly after week 10 of humerus development, during which it will form the glenohumeral joint.

The venous drainage of the scapula is largely accomplished by the axillary vein, the suprascapular veins, and numerous small and highly variable anastomotic tributaries.

The lymphatic drainage from the right scapula empties into the right lymphatic duct and into the thoracic duct from the left scapula. The lymph nodes associated with the scapula include the axillary and the supraclavicular lymph nodes.

The nerves to the scapula include the dorsal scapular, upper and lower subscapular, and suprascapular nerves, which arise from the brachial plexus at the anterior ramus C5 root, the posterior cord, and the superior trunk respectively. See “Muscles” section below for more details regarding specific muscle innervations.

The intrinsic muscles of the scapula attach directly to the surface of the bone. These muscles are the four members of the rotator cuff and act to stabilize the glenohumeral joint. These include:

Stabilizing muscles of the scapula include:

Other muscles attached to the scapula include:

Os acromiale – Unfused center of secondary ossification in the acromion that may cause pain and tenderness. It is thought to increase the risk of impingement and rotator cuff tears. Initial treatment can be conservative, but surgical excision of the unfused fragment is an option in refractory cases.[1]

In cases of severe shoulder arthritis, malignancy, or other indications for total shoulder arthroplasty, the scapula becomes important. The glenoid fossa and labrum, which make up the scapular portion of the joint, must be replaced with an artificial component. Additionally, preoperative evaluation of glenoid version relative to the scapular axis and scapular inclination using radiologic methods, such as CT scanning, should be undertaken by the surgeon as to reduce operative complications and to ensure optimal prosthesis implantation.[3] Glenoid rim positioning has also been shown to be important in determining the amount of bone mass eligible to be used for anchor positioning in prosthetic insertion during arthroplasty.[4] During total shoulder arthroplasty, there is a significant risk to the axillary nerve during deltoid dissection. A study has shown a linear correlation between acromion-axillary nerve distance and upper arm length, thus allowing for a better prediction of the location of the axillary nerve.[5]

The scapula is a strong bone and protects the posterior upper chest. Scapular fractures are rare and indicate severe trauma. Winging of the scapula may occur after injury to the long thoracic or the spinal accessory nerves. The long thoracic nerve may be injured during axillary dissection, trauma, or a thoracotomy.[6] The spinal accessory nerve may be injured during a procedure or with trauma to the posterior neck. In the case of a winged scapula, a pertinent physical exam finding would be the scapula on the affected side protruding posteriorly when a posterior force is applied to the extended upper extremity, such as in pushing on a wall with an arm flexed to 90 degrees. The thoracodorsal nerve may also be iatrogenically injured when performing surgery on the breast or axilla as it courses close to the anterior surface of the scapula. A sign of injury to the thoracodorsal nerve is paralysis of the ipsilateral latissimus dorsi muscle, leading to an inability to actively depress the shoulder. Injury to the dorsal scapular nerve should be suspected if the scapula on one side of the body is located more lateral from the midline when compared with the contralateral side. This injury causes paralysis of the ipsilateral rhomboid muscles.[7]

In shoulder impingement syndrome, there may be an abnormal scapular function. Dysfunctional movements of the scapula can lead to dyskinesis and abnormal motion of the shoulder. In rare cases after a high thoracotomy, the scapula may become impinged between the ribs.[8] In such cases, the base of the scapula may need to be revised.